The Most Popular Festivals in Malta 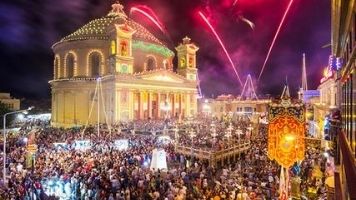 Festivals in Malta – Festivals in Malta include several cultural and religious festivals also that take place every year. The festive celebrations not only a season of food, drink and cheer, but also bring out local Mediterranean roots.

Families plan huge lunches also; thanking for what they have along with their families. During these festivals in Malta, the streets are crowded with carts, offering a wide range of different foods, traditional sweets and foodstuffs also. Moreover, the warm climate also makes it even more pleasant.

The festivals in Malta are as follows:

The Valletta Baroque Festival puts together an excellent collection of domestic and also international musicians to perform. In adddition to set in a variety of beautiful locations to suit the show, it’s famous cultural event without a doubt.

It is celebrated to remember St Paul’s shipwreck in Malta in 60 AD. This festival in Malta is a one-day celebration featuring marches and costumed parades as well.

People throw color papers in the streets and fireworks display is also an added feature. To mark the event, St.Paul’s statue is carefully brought through the streets and hundreds of doves are released into the sky. So, when you are in Malta, don’t miss this very beautiful, atmospheric show.

A traditionally Catholic country, and this Carnival is also a major annual festival in Malta. Maybe not at the standard of how it’s celebrated in Brazil, but it’s a fine, colorful festival that still marks Lent’s start as well.

Local float builders plan for Valletta’s annual celebrations with all sorts of floats, and also themes. The parade itself looks huge with major music and performance session, and the regional clubbing scene extends in the evening.

If you’re looking for something really crazy, take a boat to Gozo and join the Nadur village celebrations. The village experiences young people dressed in all kinds of costumes. The boat, as well as the hotels and hostels, have limited capacity.

Holy Week and Easter – A Major Festival in Malta

Easter is a major festival in Malta, and the celebrations last for a week, beginning on Friday before Good Friday with a procession including Our Lady of Sorrows statue through Valletta streets.

On Maundy Thursday ,there are’ seven visits’ where people visit seven churches of their choice in the evening. They pay homage to the Repose Altars. Many churches open their doors for most of the evening.

The Festival Highlights the Processions

Serious yet interesting processions hit the streets on Good Friday, bearing a series of statues depicting various parts of Christ’s Passion. On Easter Sunday, the celebrations are even more pleasant as the Christ statue is taken back to church and marchers enjoy delicious meals with their families.

To take part in a procession on Good Friday, visit Naxxar, Senglea, Zebbug or Mosta. Processions are held at 3 pm so you need to get there early to avoid getting caught in traffic. Many processions are held in Malta and Gozo on Easter Sunday, usually, around 9 or 10 am in the morning.

Who hates Strawberries? The tasty red fruits take an important place at the annual Festa Frawli in the old farming village of Maherarr. Between the green hills, this is the ideal location for a festival linked to strawberries, grown in the fields around the village famous for its agricultural products. The streets around the parish church and also the square will be lined with shops selling strawberries.

Throughout the day, tourists will search through the strawberries, as well as fruit-based sweets, snacks and beverages and you can look for new dishes as well! Many art stands also sell local works and a number of folk bands playing during the festival.

30 Most Important Festivals in India – Every Indian Follows

Fireworks are always a great idea, bringing magic to any event. The International Fireworks Festival in Malta presents exciting displays from  local fireworks factories as well as professional pyrotechnic firms. On the final day of the season, there will also be a Grand Finale to conclude all the grand finals at Barriera Wharf in Valletta and bastions. On the other side of the city , there are supporters and energetic photographers to experience the action.

Mdina is an appealingly well-preserved historic bastion town, and the medieval festival takes the city back to the Middle Ages, inviting tourists to take part in a spot of time travel and also experience the knighthood’s golden days. Furthermore, you can also enjoy the traditional local music and flowers of spring season.

There is typically also a falconry show and different displays around the old bastion town.

This annual music and arts festival, lasts three days in spring, is a common event among local youth, bearing a message for the environment. Several live bands play at this time of the year, both local and international, and the weather also rarely disappoint, making a perfect outdoor festival to attend.

So get a beer and food, find a nice place, and just hang out.

Are you keen on the art of film?

At the Valletta Film Festival, you will admire nearly 100 short and long films presented at some of the most beautiful places in Valletta.

From indoor theaters to open-air screenings, it’s a perfect opportunity to indulge in 46 films and 50 short films produced worldwide.

Summer Folk festival or festival of lights dates back to the days before the Knights had arrived in Malta.  But today the festival is a merry event to spend time with family and loved ones. Picnics are the ideal pastime, and the wine flows freely, including a variety of live acoustic music as night falls.

Why should you attend?

It’s a perfect chance to see some important elements of Maltese society, giving you a sample of the heritage of Maltese people too.

Ghana fest – One of the Folk Festivals in Malta

Gibana fest is a Maltese folk festival held in Floriana every June. It’s not associated with Ghana’s nation, but rather with traditional folk music, known in Maltese as Giedana. It’s a fun three-day celebration that the entire family will enjoy. Experience Maltese cuisine along with musicians and dancers.

The Malta art scene, the Arts Festival is a major festival showcasing a number of art forms including music, dance, theater, and sculpture. Set in some of Valletta’s most significant cultural buildings, visitors can experience Malta’s impressive arts scene in a relatively small space.

Malta’s architecture provides the ideal setting for a jazz festival, and it’s a bit of a grand event. Set against Ta’Liesse’s captivating waterfront location in Valletta, the jazz performers take the stage and give the soundtrack a three-day fest of brass, bass, and beats.

The Farsons Beer Festival – One of the Largest Festivals in Malta

The event is aimed at promoting both locally brewed beers and foreign brands, but it’s worth attending for the music and atmosphere! It claims to be one of Malta’s biggest and also the most exciting outdoor activities, the Farsons Great Beer Festival features a range of varieties, tasty food stalls and a children’s fairground, all prepared for a series of live bands of local artists.

Delicata Wine Festival – One of the Local Festivals in Malta

One of the local wine producers, Delicata, arranges their own wine festival flavor over two weekends. It’s a fun social event where you can enjoy a taste of different local wines while enjoying music and good company.

Throughout the activities, tourists can also taste as many local wines as they want, soaking up some of the best food on sale. In addition to it, artists provide a soundtrack; you can also have a relaxed atmosphere for an enjoyable evening.

Flying is always interesting and also has been the focus of many a worldwide annual gathering. With its rich aviation heritage and craft museum, it makes sense that Malta has one of Europe’s best displays.

Flying adventurers will watch air shows fitting around the beautiful Maltese countryside, and learn more about the machines and history.

Notte Bianca festival in Malta lights up Valletta with artists, music, and arts during the celebration. Museums and state palaces open their doors until late night, hosting dance performances, visual art  and theater performances also. Not only museums but also cafes and restaurants are open with food stalls until late.

The Mediterranea Festival in Malta is a series of events celebrating Gozo’s arts and also culture scene, with a full autumn schedule of opera and music concerts, in addition to seminars, talks and walks on some of the island’s many ancient and historic hotspots also.

The Three Palaces is a relatively recent calendar event, which has also great performances in some of the finest palaces in Malta. Famous artists from around the world show their music and dance skills also.

1. What is Malta famous for?

Besides being popular for diving, architectural places, and festivals, Malta is also a common film location. Malta’s cliffs,  landscapes, and also historical buildings make it a great background for many feature films and TV shows.

2. Which Music Festival in Malta is the biggest?

Milwaukee, Wisconsin’s 11-day Summer Festival in Malta,  presents itself as “The World’s Largest Music Festival,” a title certified by Guinness World Records since 1999. Every year since 1968, the festival receives between 800,000 and 1,000,000 people and also holds over 800 musical acts.

3. What is the best month to visit Malta?

The best time to visit Malta is spring and early summer. April, May, and June are also the best months to visit Malta. The weather isn’t hot and you also have less travelers.

4. Is Malta a rich country?

According to a long-running international survey, Malta is among the wealthiest, healthiest, happiest, and the most stable country also.

5. How many days do you need in Malta?

Major highlights that travelers want to visit include one or two days in Valletta. Also, you can also spend one day in the historic Three Cities; one day in Mdina and surroundings; if you really like nightclubbing,  for example.

You can spare one day or night in St. Julians.