The Most Popular and Cultural Festivals in Korea 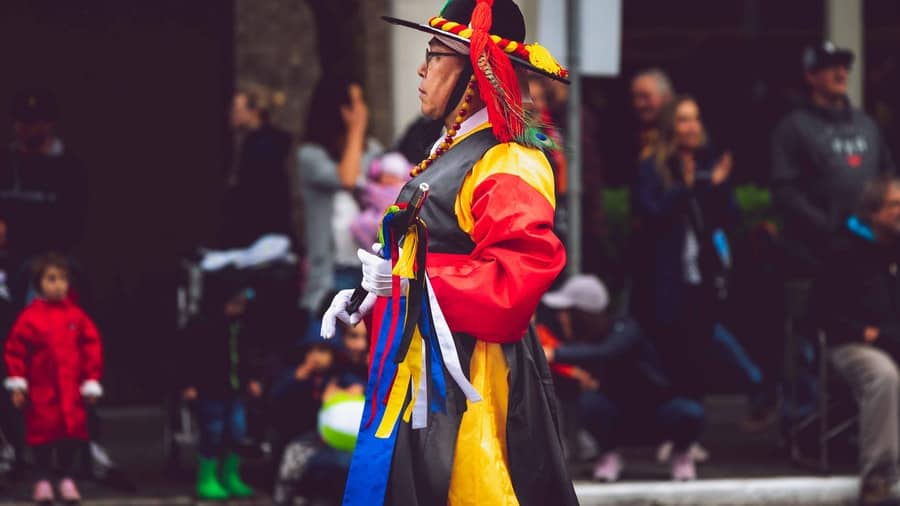 The most popular and cultural festivals in Korea always focus on the culture and the tradition of the Nation. Korea looks beautiful with its skyscrapers and majestic monuments, the country’s cultural richness and heritage is also worth experiencing. Its customs, society, people, rituals and also culture are as beautiful as its natural beauty.

Here are the most popular cultural festivals in Korea:

Seongsan Sunrise Festival – A Festival to Welcome the New Year

Each year, on the first day, local people walk up to the Seongsan Ilchulbong Hill, named Sunrise Hill, to see the first rays of the Sun and wishing everyone joy, health, and wealth. Seongsan Ilchulbong Peak has become popular for a stunning view of the countryside and listed as a World Nature Heritage Site by UNESCO. The Seongsan Sunrise Festival starts on New Year’s Eve with the local artists and also midnight fireworks featuring a nature walk, torch rally, folk dance, and music as well.

30 most important festivals of India

It is located in a frozen river of Hwacheon County’s Gangwon Province. It’s another entertaining and mesmerizing festival in Korea.  People walk through the sub-zero temperature to catch fish. Also, many catch fish with bare hands by making holes in ice. This is one of the most famous winter festivals in Korea and is also widely celebrated. In addition to it,other events along with ice fishing include snowman building, snow tunnel and snow slide building, ice sled and also ice football.

Seollal is the New Year festival in Korea and celebrated on the first day of the Korean calendar. It is one of the important festivals in Korea that the entire country focuses more on it. Therefore, people begin their festivities by performing ancestral rituals and paying homage to them. The locals wear traditional clothes, eat traditional organic food, play folk games and also listen to folk tales. Everybody greets each other and shares wishes, blessings, gifts and also sweets.

Jinju Lantern Festival – One of the Oldest Festivals in Korea

This is popularly known as the Jinju Namgang Yudeung Festival and is one of the oldest festivals in Korea showcasing the customs and culture of the region.  People lit thousands of red lanterns by Nam Riverbank and also made wishes for the well-being, safety, and prosperity of their loved ones.

The Significance of the Lantern

The tradition started way back in 1592, with the practice of lighting lanterns to discourage Japanese troops from traveling the Namgang River during the Japanese capture. Therefore these lanterns often pay homage to the soldiers of the Jinjuseong Fortress War. In addition to the unbelievable sight of countless lit lanterns, you can enjoy street parades, concerts, local street food and even make their own lantern and hang them up in the Wish Lanterns Tunnel.

It is one of the most popular festivals in Korea, held in February and lasts over three days. Jeju’s city is set on fire, seeking good health, joy, and a considerable harvest and also people welcome the New Year. Above all, the festival in Korea represents the ancient practice of burning old grass to get rid of pests before restarting the next season of farming. It is an unusual celebration, and it looks spectacular with the sight of the city on fire. There are also folk dancing, torch march, local games and also events to mark the festival.

The festival of bullfighting was celebrated in March 2010. It is an annual event, and tickets are available at a reasonable price at approximately Rs.4, 000 to 5,000. There were 132 matches in the previous event and other events included introductions to the traditional principles of bullfighting.

The sea around Jindo in South Jeolla Province will part a few times during the year, and tourists can walk along a narrow path through the sea from the mainland to a nearby island. However, the waves cause this occurrence, often referred to as the “Moses Miracle.” The trail is about 2.8 kilometers long and is about 40 to 60 meters deep. Sea parting festival in Korea takes place in March.

Hansik Festival – A Tribute to the Ancestors

Hansik festival is famous since it is the Cold Food Festival in Korea. Local people participate in non-fire cooking on this day, and eat cold food all day. The entire country conducts sacrificial rituals at Jongmyo the Royal Temple and Neungwon according to Korean mythology. Local people perform informal memorial services and visit the graves of their ancestors. People also plant trees around the grave, and pray. Hansik festival denotes the start of the harvest season and the farmers also sow seeds to start farming.

Each year through the promotion of the Boseong Green Tea Festival, Boseong celebrates its tea industry and culture. The festival in Korea takes place in May. There are a variety of events such as tea preparation, and tea culture research.

The Icheon Ceramic Festival is one more thrilling annual occurrence. There are plenty of observations and lessons to learn. Interesting courses start from making your own ceramics to learning techniques of tea drinking. Other activities include art, sales, and also exhibitions. This festival in Korea usually happens in May.

Damyang-gun, in the South Jeolla Province, well-known for its rich green forests holds its bamboo festival at Juknokwon. The festival in Korea lasts for five days in May. The environment is popular for its beautiful scenery that includes many bamboos, other plants, and also cultural places. In 2009, the Festival received more than 1.2 million tourists. The festival features orchestral concerts, popular music, pedal riding, fishing and much more.

As with other traditional festivals in Korea, Dano is also a famous one. Locals celebrate with full of energy and therefore, it’s announced as the country’s national holiday. Women wash their hair in boiling water with a sweet flag to give it a shine. Meanwhile,the locals dress up in red and blue, wearing iris roots to keep away bad luck and evil spirits. People enjoy traditional folk games such as swing and stone fight and engage in local food such as surichitteok, ssuk tteok, and also rice cakes with herbs.

Muju Firefly Festival – A Tribute to the Natural Monuments of Korea

This festival in Korea seems to be magical! When the night falls, thousands of fireflies light up the night with their brilliant natural lighting. The firefly festival is held in Muju, North Jeolla Province. Fireflies are considered very rare and are classified as one of the natural monuments of Korea. Activities include a “fireflies exploration gathering,” an opportunity to explore the natural world of fireflies and fishing also.

Boryeong Mud Festival – One of the Most Famous Festivals in Korea

Boryeong features stunning mountain scenery and beaches. The festival of mud is held at Daecheon beach. Participants slap on mud packs made from mud which is said to be a great way to improve your skin tone with its high mineral, germanium, and bentonite levels. Many fun events include mud wrestling, mud king race, mud greased fireworks, and slides as well. This is one of the most famous festivals in Korea. The nighttime activities include hip hop and dance parties. Every year “Boryeong Mud Festival” takes place in July.

Yudu is one of the most distinctive festivals in Korea. The village people offer the first harvest of the season to God and start to collect crops and also fruits as their seasonal domestic stock. One of Yudu festival’s most unusual features is that locals visit any streams nearby to wash their hair to clear any bad spirits and also bad luck from their lives. Since Yudu is celebrated in peak summer, people enjoy the festival by engaging in chicken broth with ginseng and also other nutritious soups.

Every year the Andong International Mask Dance Festival in Korea takes place in September. Korea’s lively traditional performance is still a part of daily life at one of the venues, Hahoe Folk Village. The major venue is in Andong, a town in North Gyeongsang Province. Not only tourists can enjoy Korea’s talchum (Korean masked dances), but there are also masked performances around the world. Enjoy “Seonyujul Bulnori” after the sunsets, where fireworks will produce beautiful reflections on the water.

Bongpyeong Cultural Festival in Korea has beautiful buckwheat flowers every fall. In Korea, the flowers are also associated with recalling your first love, a concept that comes from Lee Hyo-seok’s popular novel “When the Buckwheat Flower is About to Blossom.” The story is set right at the setting of the festival in Bongpyeong. The main aim of this festival is to appreciate Bongpyeong’s natural beauty by welcoming tourists and exchanging different cultural experiences.

Gwangju World Culture Kimchi Festival is one of the most famous food festivals in Korea and features many events related to Kimchi. Therefore,the festival in Korea sees from Kimchi-making contest, painting to Kimchi master contest and cooking classes at Kimchi; it’s all fun and entertaining there. One can also come across a vast Kimchi market, and choose from the unique Kimchi varieties.

Busan One Asia festival in Korea is completely for music lovers. It is a popular Korean pop music carnival and above all one can enjoy the impressive performances on stage. As one of the most famous festivals in Korea, it has performers such as A Peach, Black Peach, iKon, Wanna One, Momoland and SF9, NU’EST W. Most importantly,the festival allows us to get a thorough knowledge of Korean pop culture through concerts, shows and also fan meetings. The music festival in Korea features fusion music and also music styles from other Asian countries .

Indians in Korea celebrate Diwali in the city of Suwon in South Korea, days ahead of its actual date, and also offer the South Koreans a taste of Indian culture. Diwali means rows of lights; it is the festival that represents the triumph of good over evil, of light over darkness and of knowledge over ignorance.

Chuseok is a huge festival in Korea. The meaning is “autumn eve.” Chuseok is a harvest festival during which families meet to share food and also stories, spend quality time with each other, and thank the ancestors for their blessings.

Korean culture is deeply influenced by Confucian values and this is not only present in personal lives but also in their business. Confucianism encourages unity, respect for the elders and government, the importance of family, friendship and ancestors, and also their culture.

In Korea, all the major religions of the world, Christianity, Buddhism, Confucianism and also Islam, exist peacefully with Shamanism. 44 per cent of the Korean population has a religion, according to the 2015 statistics.

South Korea is the third largest in Asia after China and Japan, and also the seventh largest exporter in the world, with its main exports being electronic circuits (including computers, cell phones and other electronics) and automobile also.