An exciting experience is the culture and heritage that goes back to the beginning of civilization, the tourist places to visit in China. Mysterious destinations that take travelers back in time to give them an insight into the oldest and most repected treasures known to mankind in the world.

There is a huge amount of expectation, mystery and curiosity linked for decades to places to see in China. China has been a source of inspiration and admiration for many explorers. Since it started from the medieval age that went out into the wild in search of a magical land in the North.

What does China offer to its travelers?

China is one of those places that is so vast and varied that it is a must to plan exactly what you want to see during your journey. It is world’s fourth – largest country. So, there will be no wonder, when you find a wide range of great natural landscape. There are iconic tourist attractions, cultural landmarks, and an endless list of things to see and do.

While China’s cultural attractions are much more popular, it also features a variety of adventurous activities and landscapes that will inspire and excite you. Drawn by an air of mystery, there has been a huge increase in the number of tourists to China. The World Tourism Organization expects that China will become the most popular tourist destination in the world by 2020. The richness of China’s greatest sights won’t impress any visitor.

China may not reach modernizing economic success fast, but it is not the medieval backwater of travelers ‘ tales that the truth lies somewhere between. Not far from the shiny, high-rise cities ‘ excitement and wealth. Water buffalo pulls the plow, and donkey carts are still a popular form of transportation. For the tourist, making a entry into the countryside would rarely fail to produce a lively market in the village or a lonely pagoda on a hill.

China is such a huge and diverse country, with most of its great sights dispersed far and deep. The places in China will allow you to choose from a variety of attractions to suit your interests, time and budget.

The Great Buddha’s sculpted stone statue at Leshan is one of the top tourist destinations in Sichuan. Leshan thrills you at first sighting of the Great Buddha carved carefully into the cliff face above you more than 1200 years ago. Whether it’s from the top looking down, from a boat looking straight up, from the path of nine switchbacks looking somewhere in between. The moment, the sun rises on you that the big, gracefully carved, stonewall you’re viewing is actually the lobe of a huge ear. That ear is just a small slice of a well-proportioned giant – that point in time is exciting.

The Naxi town of Lijiang, in the province of Yunnan, is one of the most exciting destinations in China. It is known for the ancient textures of ethnic minority life in its old town and the spectacular beauty of Jade Dragon Snow Mountain rising across the town. Lijiang is a town of two parts, is declared a UNESCO World Heritage Site.

The old town and the new modern town are quite very different. You’re going to spend most of your time in the old town, and it’s full lanes that have twists and turns. Although the old town itself can be busy, with smaller back alleys. Exploration indicates almost countless outside of town. 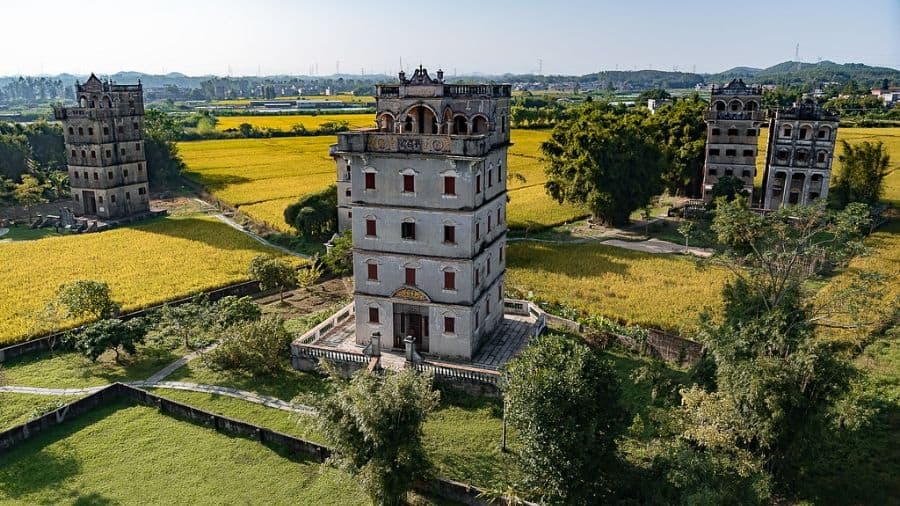 Kaiping is home to one of Guangdong’s most striking man-made sites, the diaolou awarded by UNESCO. It has multistory watchtowers and homes in the farmland around Kaiping. It is a town near Guangdong, spread around 1800. Such strong bastions built in the early 20th century may not be what you would find traditionally in the Middle Kingdom.

But they inspire with their strange blend of foreign and domestic architectural styles: Greek, Roman, Gothic, Byzantine and Baroque. Some of the architectural styles you might hope to see here are a riot of arches and balustrades, Egyptian columns, domes, cupolas, corner towers, Chinese gables and Grecian urns. 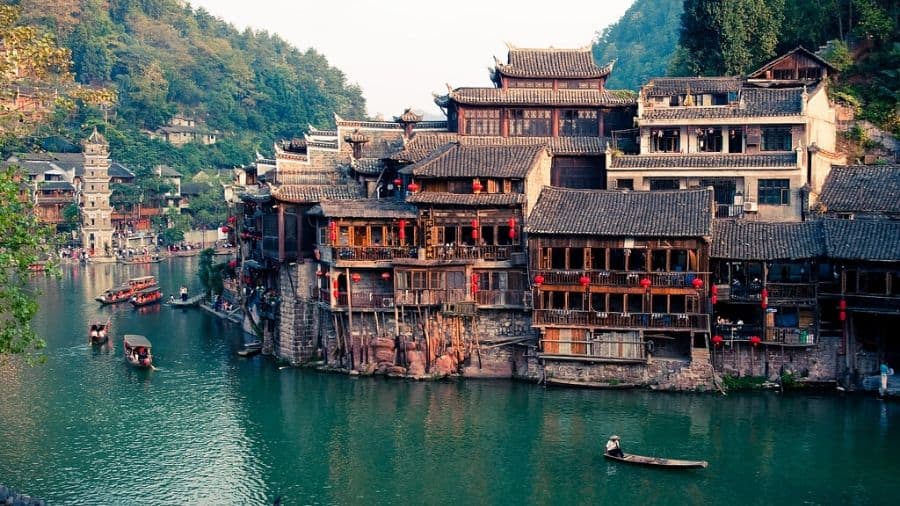 Vertically positioned houses on stilts, ancestral halls, decaying temples. The gate towers set in a warren of back streets full of shops selling unusual foods. The medicines are enough alone to make the ancient city of Fenghuang an important stop. Add to the fine atmosphere on either side of the Tuo River and the chance to live right by the river in an in. You’ve got one of China’s most impressionistic cities. Tourist development takes importance over great efforts to preserve this place.

Old fashioned Pingyao, the best-preserved ancient, walled city in China. With an unbroken sense of continuity to its golden days of the Qing dynasty is a real gem. This is your dream China: Red-lantern-hung lanes set against night-time outlines of majestic city walls. The ancient shop fronts, graceful courtyard architecture, monumental towers covering northern China sky, and a whole brood of  temples and ancient buildings. You can travel through China’s length and breadth and not find a city like that. Indeed, you may never want to leave when you discover Pingyao.

Just as you arrive in Beijing, China’s capital, sooner rather than later you will note the majestic presence of an ancient palace. Forbidden City is one of the most beautiful places to see in China,is in the heart of Beijing. Travelers will visit the 180-acre building that now houses some of Chinese history’s finest collections.

Forbidden City is on top of the list of most popular tourist destinations to visit in China in terms of annual tourists.

Witnessing an 8,000-strong military frozen in time for the past 2,000 years would be interesting. In memory of the dead soldiers who are celebrated for their sacrifices made for Qin Shi Huang, the first known emperor of China, a whole army full of warriors, generals, and horsemen. This interesting mausoleum has been there in China in 1974. 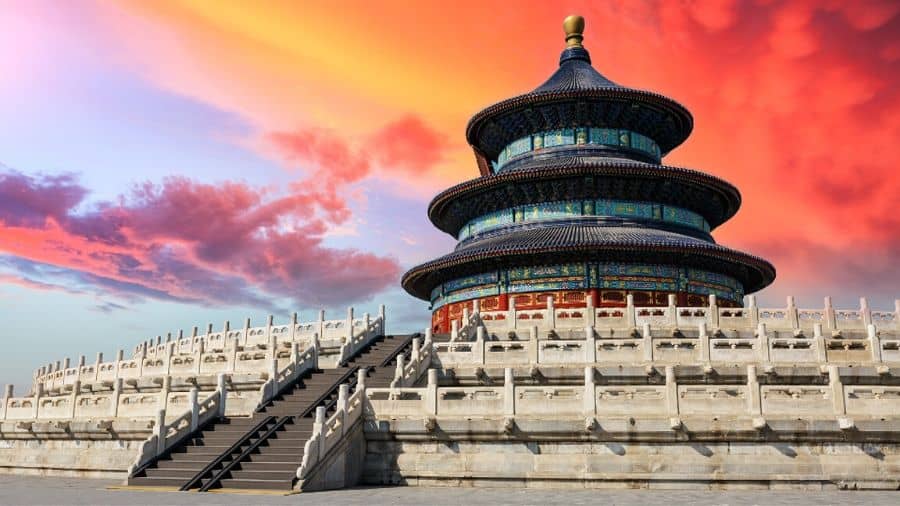 The Temple of Heaven is one of China’s holiest and admired religious tourist sites, a great temple built in Beijing 600 years ago. A place recently made a UNESCO world heritage site where the emperors of the centuries gone by would pray for a good harvest. This temple is a local favorite with strong significance to Taoism. It often provides a good chance for lovers of photography to get into some amazing pictures. 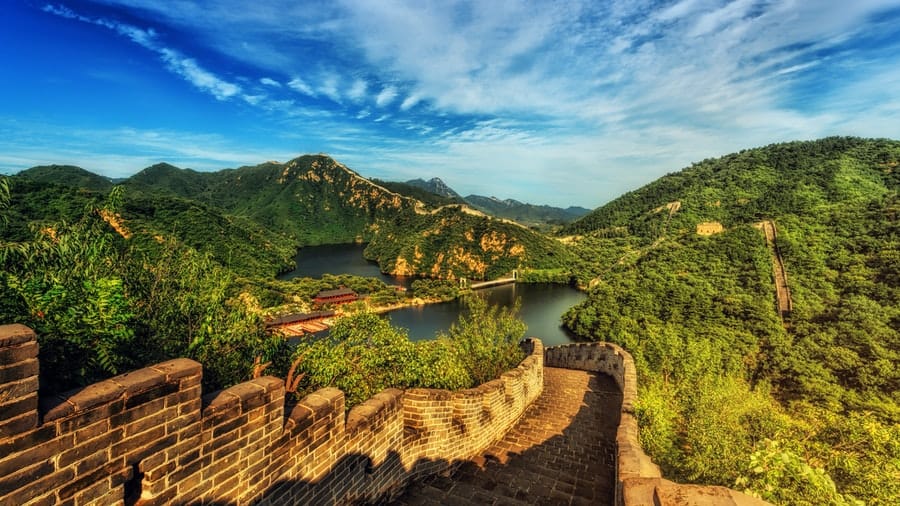 China’s Great Wall is currently one of the world’s seven wonders most spoken about and for a good reason! A 6000-km long wall constructed two thousand years ago is a great architectural achievement. The same would be almost impossible to reproduce even in today’s time.

China’s Great Wall catch not only the attention of international tourists , but also the lovers of history and architecture. As they understand the difficulty of the wall that was reconstructed over the years. China’s Great Wall is the only monument visible from the space in the world! 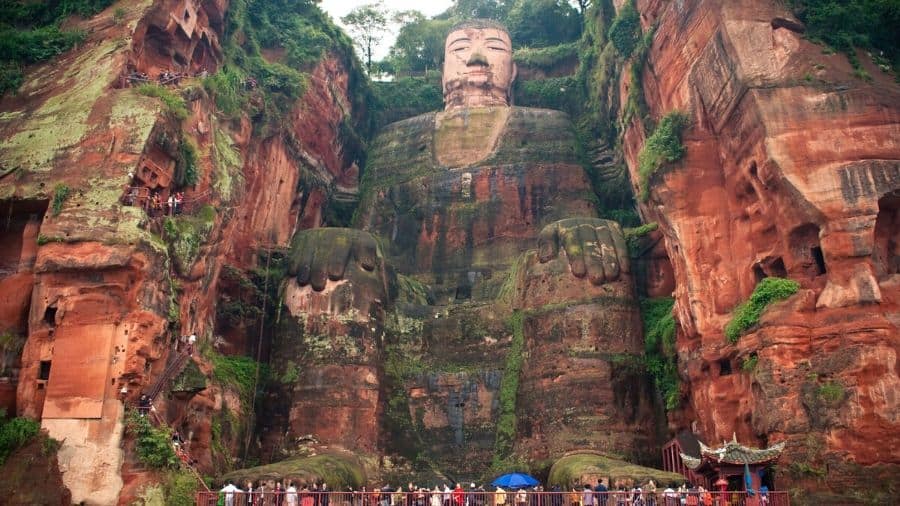 More than 2,000 years ago, a huge 230-foot Buddhist statue is in Leshan, Sichuan (China’s southern province). The statue was part of the Chinese territory’s first – ever Buddhist temple. Buddha’s huge majestic figure carved in a sitting position is a stunning place for travelers who first visit this location.

1.What are the best places to visit in China in January?

Travelers can visit the Great Wall of China during winter wonderland filled with snow.

2.What are the places to visit in China next to Hong Kong?

You can visit lively tourist cities like Macau and Guangzhou while visiting Hong Kong.

3.How often is English spoken in China?

Communication in China can often be a huge problem, as most of the nation is not speaking English. When touring a country side or inland tourist destinations in China,  you need to do all reservation in advance.

BEST PLACES TO VISIT IN CHINA